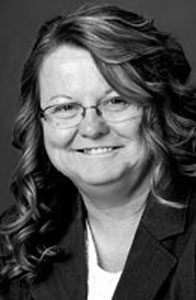 Sherry Main Wise was sworn into the position of Clerk of Courts on December 29, 2011 for a term of four years beginning on January 1, 2012; replacing the retiring Shirley Stockdale. Sherry has worked in the Clerk of Courts office for the past 15 years; the last five years, she held the position of the Chief Deputy. As Chief Deputy, she was responsible for the supervision and management of both the clerk of courts and the clerk of orphan's court dividions of the Greene County Court of Common Pleas.

Wise was also responsible for the balancing of accounts for monies collected by both offices and for appropriately distributing monies to the correct entities.

Prior to that she was the second deputy, a position in which she was responsible not only for scheduling and docketing cases from the criminal division of court, but also for the filing and printing of marriage licenses, the filing of estate documents and research requests for marriage, birth, and death records from the orphan's court division.

In 2004, Greene County was one of the first counties to implement a new statewide case management system mandated by the Administrative Office of Pennsylvania Courts for all criminal and juvenile cases. This required immediate and continuing training on all aspects of the system. In 2009, the Common Pleas Case Management System again redesigned the juvenile division, separating juvenile cases filed by the Greene County Juvenile Probation Office from dependency cases filed by Children and Youth Services, requiring additional training for that portion of the system. Wise was one of the few invited by the AOPC to participate in an input session on the redesign of the updated portion of the system. She continues to participate in training sessions provided by AOPC to help ensure the smooth operations of the state system.

In Sherry's new role as Clerk of Courts, in addition to criminal and juvenile courts, she is responsible for orphan's court, adoptions, marriage licenses, first and final accounts and settlements of small estates.

Learn more about The Clerk of Courts’ Office encompasses the criminal, juvenile and orphans’ divisions of the Court of Common Pleas.