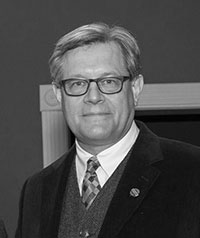 The Honorable Toothman was appointed by Pennsylvania Governor Ed Rendell to fill the vacancy created by the Honorable Terry Grimes's retirement in January 2009; the nomination was confirmed by the Senate July 2009. As an appointed judge, Toothman will serve until the current term expires in January 2012, although he will seek a 10-year term in the 2011 municipal election.

I am fully aware of the honor bestowed upon me by Governor Rendell's nomination, and I thank him. For the Senate's confirmation, I am especially grateful to Senator Stout, for his steadfast loyalty — and his experienced understanding of a complicated process fraught with Democrats and Republicans, but who he eventually united in their vote of confidence in me.


As a young man, Farley Toothman never really thought of following in the footsteps of his father, the late Glenn Toothman Jr. who served for 20 years as judge of the Greene County Court of Common Pleas.

Toothman, 54, served as Greene County solicitor since 2004. He is also solicitor for Greensboro and Waynesburg boroughs and maintains a private practice. From 1996 to 2003, Toothman served two terms as a Greene County Commissioner. Prior to that, he was a partner in private practice with his father and brother. Toothman said for much of his career, as a commissioner and a solicitor, he has been involved in mediation, "recognizing the strength of two adversarial positions and finding a common theme you hope unites both parties." Toothman's legal practice has primarily focused on what he calls "public law" in his position as a solicitor for the county and for municipalities.

A life-long resident of Greene County, Farley is a graduate of Waynesburg High School, Waynesburg University and Duquesne University's School of Law. Toothman and his wife, Ingrid, have four children. Farley is the son of Katherine and Glenn Toothman, Jr. (both deceased); he has two brothers Glenn III and Harry, and one sister, Ellen.