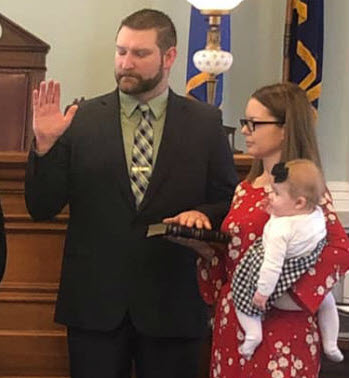 Sworn into office on March 3rd, 2019, Marcus Simms took office after Sheriff Brian Tennant passed away due to a long and courageous battle with brain cancer.

Simms began his service to his community as a firefighter for the Center Township Volunteer Fire Department while attending college.  When his family moved in 2010, he continued his service and joined the Waynesburg-Franklin Township Volunteer Fire Department.  After graduating College, Simms was employed as a Sheriff’s Deputy for the Greene County Sheriff’s Office.  Simms attended the Municipal Police Officers Academy at night and on the weekends while maintaining his employment at the Sheriff’s Office and then attended the Pennsylvania Sheriff’s Academy after graduating the Police Academy.  Simms was hired part-time for the Waynesburg Borough Police in 2012 and full time in 2013. He resigned from the Sheriff’s Office after being hired full time at Waynesburg.

Simms is a lifetime resident of Greene County and a graduate of West Greene High School.  He received his Bachelor of Science in Business Administration from Westminster College.  He is also a graduate of the Municipal Police Officers Academy at California University, Pa, and Pennsylvania Sheriff’s Academy at Penn State.  Simms is a certified handgun, rifle, shotgun and less-than-lethal munitions instructor.  He is Motor Carrier Safety Assistance Program (MCSAP/DOT) inspector and weights and measures certified.

During Sheriff Simms’s time in law enforcement he has received the Life Saving Award, Merit Award and Distinguished Service Award.

Simms resides in Waynesburg with his wife and daughter.

The Sheriff's Office is a law enforcement agency sworn to serve and protect the citizens and property of Greene County.