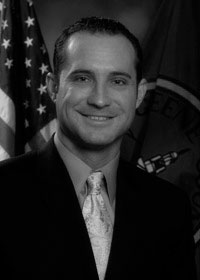 February 2015 — Grandel announced the he would be seeking re-election for his 4th term as the office of Greene County Treasurer, a position he has held since 2004.

December 29, 2011 — Incumbent Cory L. Grandel took the Oath of Office for County Treasurer after being re-elected in the November 2011 general election; the office of County Treasurer is a 4-year term. Click here for ceremonial photo, in which he was accompanied by his two children, Jaden and Molly. Grandel has held the office of Treasurer since 2004.

Born and raised in Dry Tavern.
Married to Laura Marquis, where they live in the Southeastern Greene area.
Proud father of son Jaden and daughter Molly.
Son of Bruce and Stephanie Grandel.
Grandson of Dorothy and the late Paul Grandel of Dry Tavern and the late Steve and Anna Caro of Clarksville.

Cory has served on the Waynesburg Area Chamber of Commerce board of directors and as president of Greene County Youth Soccer Association.

In addition, he held the position of president of Greene County United Way and currently serves as a director. Grandel serves on the executive board for the Pennsylvania State Treasurer Association and is a life member of the National Rifle Association.

The County Treasurer is elected by the general public and is responsible for receipt, custody and disburser of monies and, as an agent of the state, the issuing of dog, hunting and fishing licenses.